Why do we need to control mink?

American mink (Neovison vison) are very effective introduced predators and consequently many prey species have not evolved effective defence strategies. They have a significant impact on native wildlife including a wide range of birds, rabbits, fish, and game, as well as water voles.

Mink were first introduced into Britain for fur farming in the 1920s, establishing themselves in the wild throughout the UK as a result of escapes and deliberate releases. They were first recorded breeding in the wild in 1956 and are now present in almost every county in Britain. It is now an offence to release or allow the escape of mink into the wild.

They are mostly nocturnal or active at dusk, but may be seen at any time of the day. Their presence can often go undetected and the first indication that they are about may be that stretches of rivers or lakes lose their moorhens, coots and water voles.

Mink rafts were developed by the Game Conservancy as a tool to monitor for the presence of mink, as they leave footprints on a clay pad when they visit.  The raft then forms an excellent base on which to set a cage trap.  Mink rafts are the main detection and control method used by the project although traps may also be set on the bank.

Each raft needs to be positioned with care giving consideration to flood defence, so as to avoid causing a blockage in, or otherwise impeding, a watercourse. The exact position of each raft is a compromise between flood defence considerations, health & safety for checking, convenience of access, public visibility, and likely spots for detecting mink.

Rafts are placed away from in-stream structures, except for groynes where they may be placed downstream of such a structure. A raft may be placed close to or under a bridge only if there is sufficient space below the underside of the bridge under flood conditions for the raft to float freely. Rafts must not be placed close to and upstream of flood defence structures or weirs. Rafts must not be positioned where they could themselves cause an obstruction.

In monitoring mode, the clay cartridge is installed without a trap and the raft is checked every 1 to 3 weeks. To assist access to the clay cartridge and to reduce the risk to the checker, the raft may be pulled to the shore and partially onto the bank. The clay cartridge is removed and inspected for footprints or other field signs. Once these have been recorded, the clay surface is smoothed over and the clay cartridge replaced in its hole under the tunnel. An effective method of smoothing is to remove any debris then dribble a little water over the surface and gently run the fingers back and forth over the clay until indentations have disappeared. To prolong the life of the clay, every few months the clay can be turned over by digging a finger into one corner of the cartridge, carefully easing and lifting the clay out in one piece, then flipping it over and relaying it place before smoothing over.

For some reason otters can vandalize the clay cartridge, we are not sure why they do this but it can become annoying after a time. If this becomes a problem, holes can be drilled at both ends of the tunnel with  a 3 inch gap so that 12mm doweling can be inserted to make the entrance more narrow to stop otters walking through but wide enough to allow mink to still pass through. 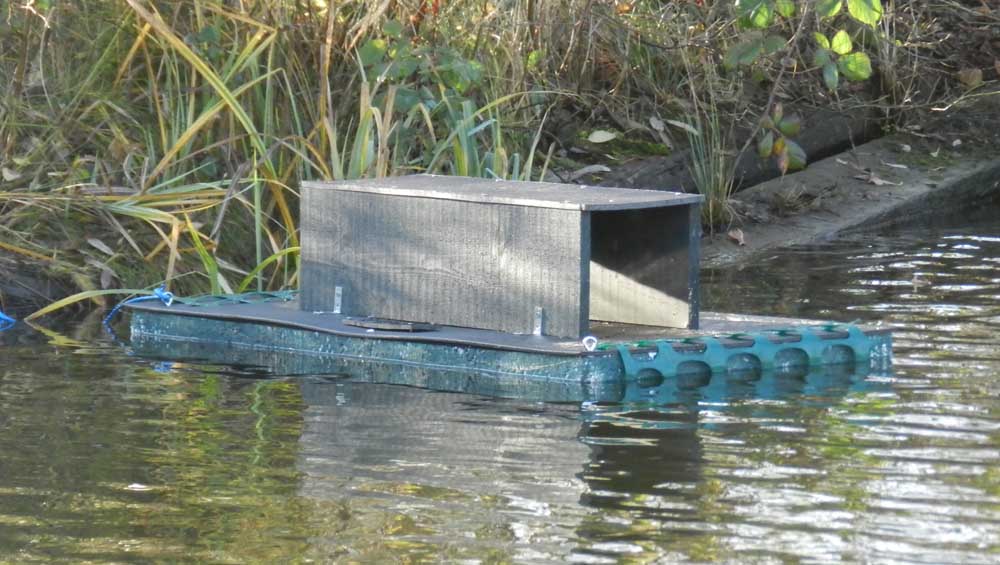 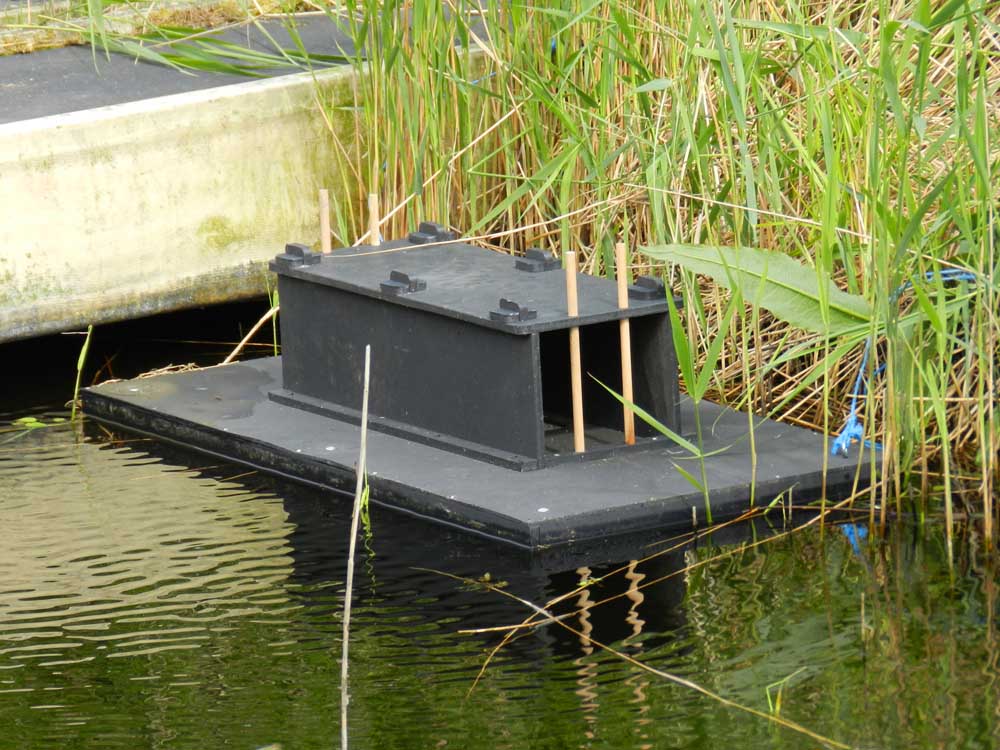 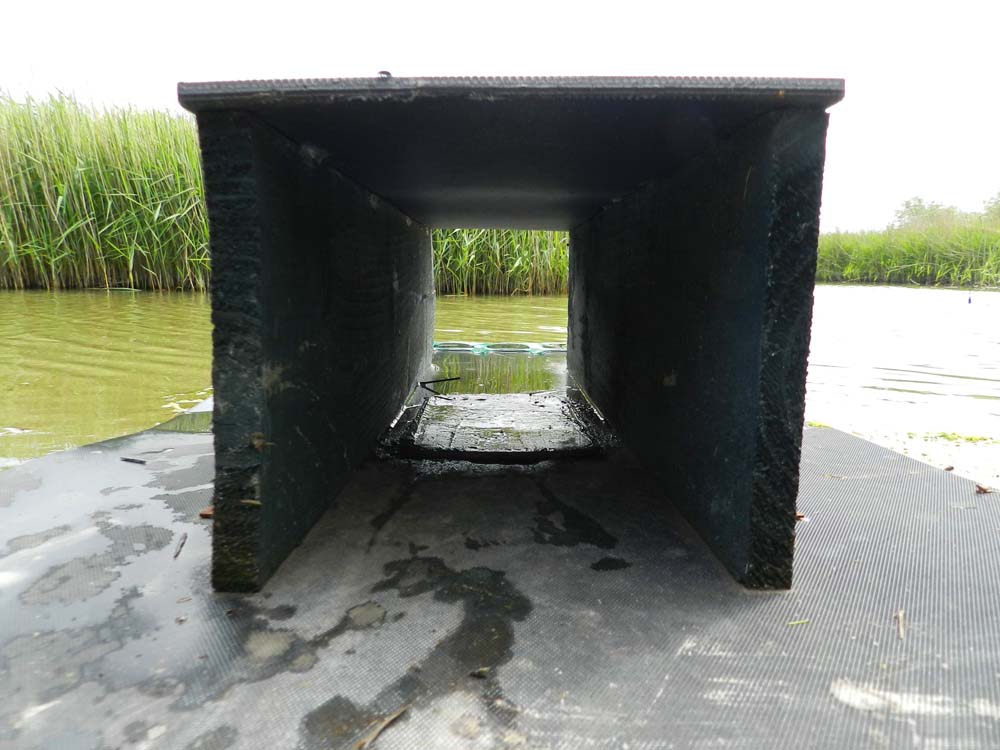 Inside of mink raft tunnel

Footprints can be detected using a mink raft or found in soft substrates such as mud banks, clay and wet sand. Below are a few tips to help identify mink footprints. You may also come across a mink scat; this has a strong pungent odour unlike otter spraint which has a fishy smell. This is how a mink marks its territory but since numbers are down compared to when the project first started we do not see as many, this is because they are not coming into contact with each other as frequently. Here are also some tips on how to identify mink scat. 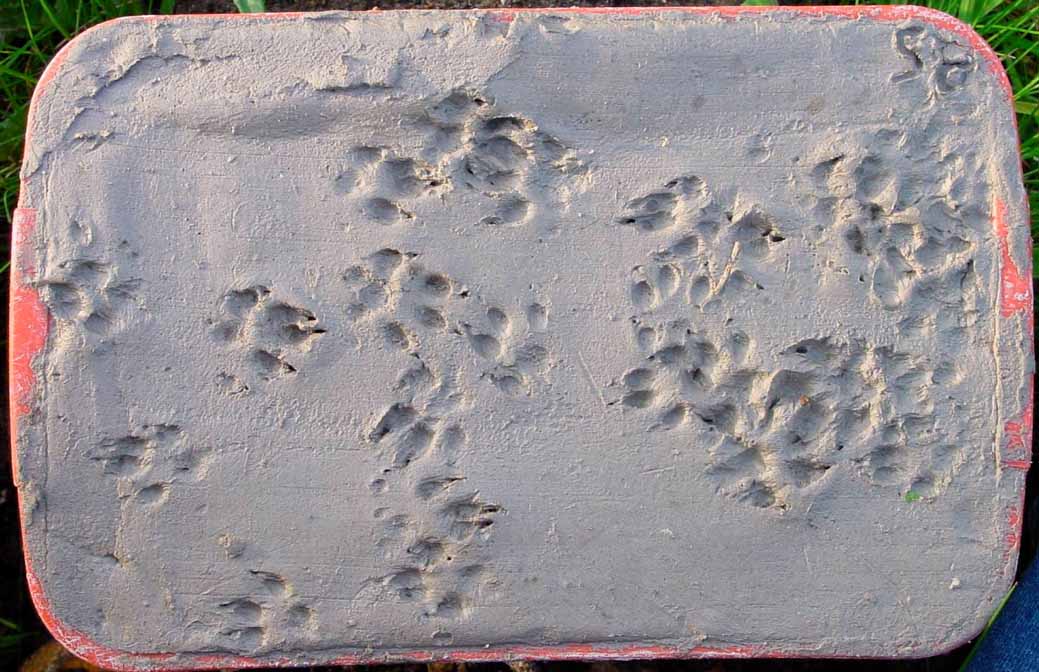 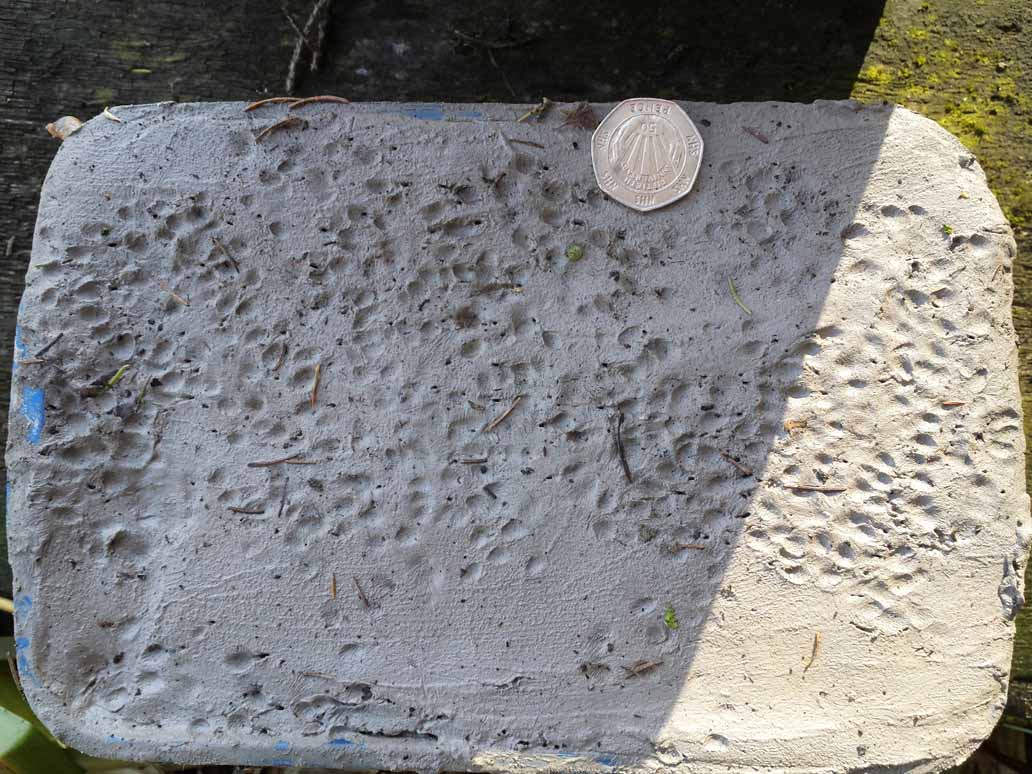 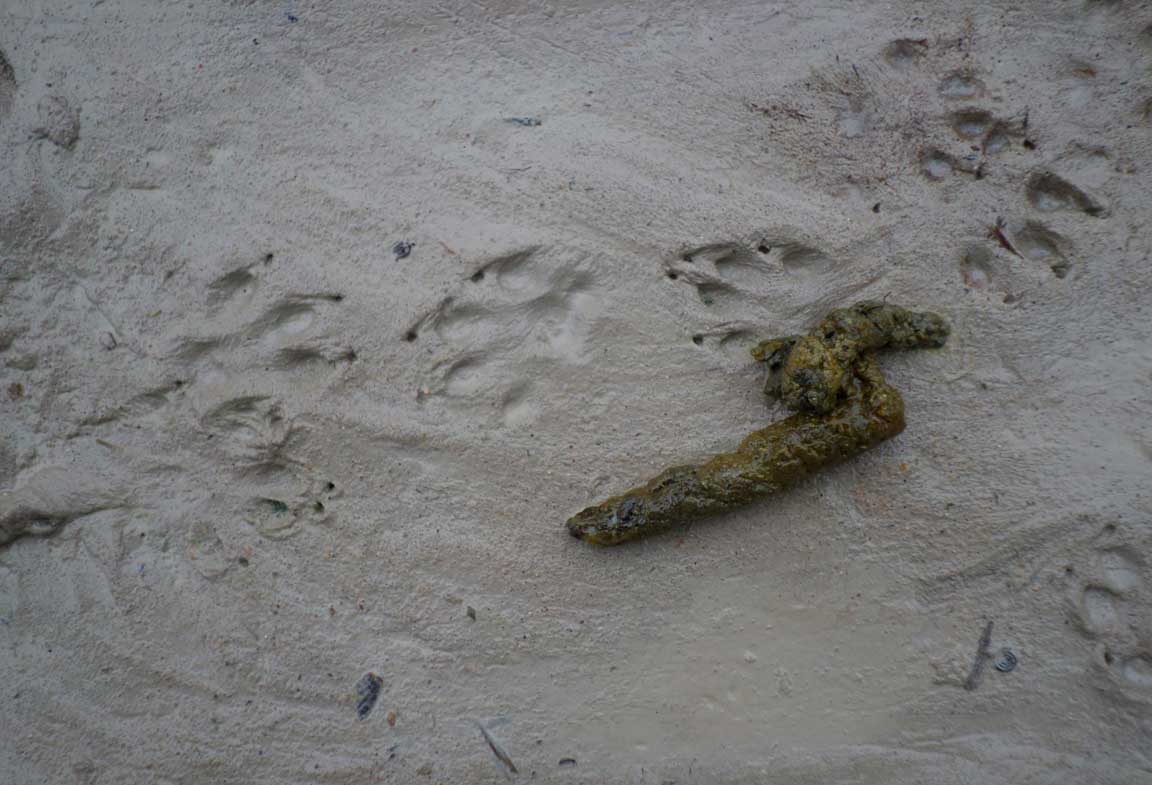 Once mink footprints have been detected a trap can be set. In trapping mode, the clay cartridge is removed and a mink trap placed inside the tunnel, secured in place and set to capture. A suitably sized stick or wedge shaped piece of wood is an effective method of securing the trap in place. This prevents the trap from being moved out of the tunnel and provides a stable base for potential captures entering the trap. The clay cartridge can be left in place underneath the trap but may become damaged or dirtied, and so is usually removed and kept where it will not dry out, such as in a plastic bag.

The trap must be checked at least once per day; this is a legal requirement. Preferably it should be checked twice per day, ideally in the early morning and late afternoon or early evening. This is to reduce stress on a captured animal and to allow non-target species to be released as soon as possible. A twice daily check is particularly important if there is a risk of accidentally capturing water voles, or in cold weather. Ideally and where possible, the trap should be checked from a distance without approaching the raft closely, by viewing whether or not the trap door has closed. The traps supplied by the project come with otter guards attached, if for some reason it comes off and you lose it or if using one of your own traps an otter guard can be made to fit very easily. This can be done in the same way as reducing the gap on the tunnel with doweling as mentioned in raft inspection or you can fix some garden wire to the mesh on the trap at the top of the entrance fixing it to the bottom to reduce the size of the entrance.

Non-target species must be released at or near the point of capture. Care should be taken when releasing non-target species. With practice, the trap door can be opened without risk of injury, by using a hooked piece of strong wire such as fencing wire to pull back the door-retaining bar, and another piece to open the door.

Mink (and grey squirrels if they are caught) cannot legally be released and must be dispatched as soon as possible to reduce any stress to the animal. 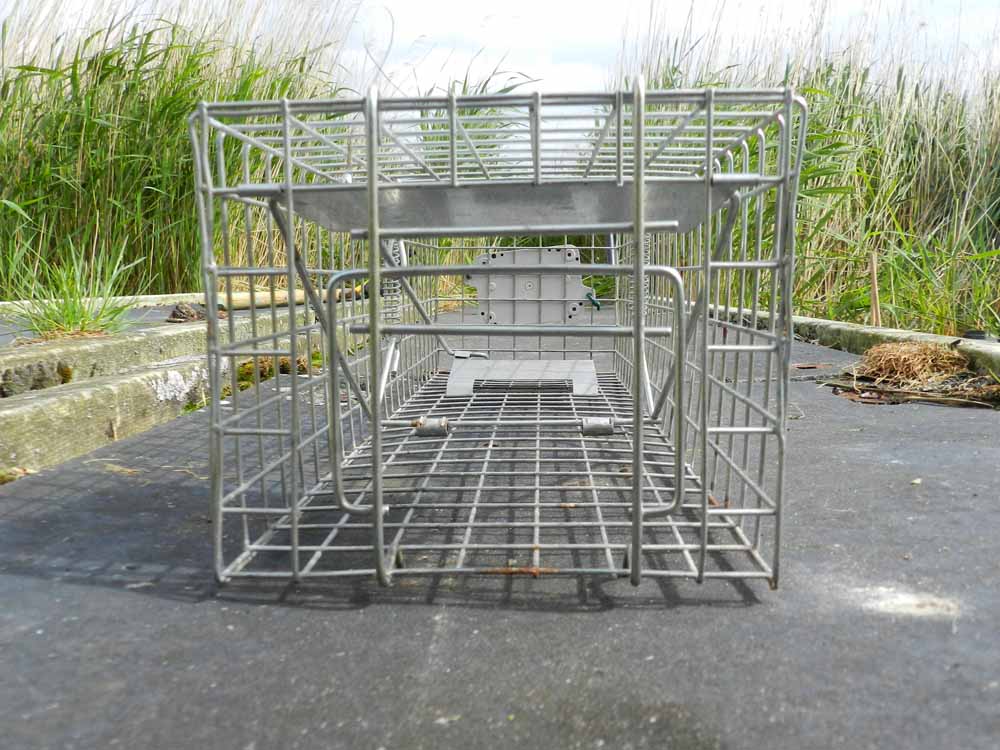 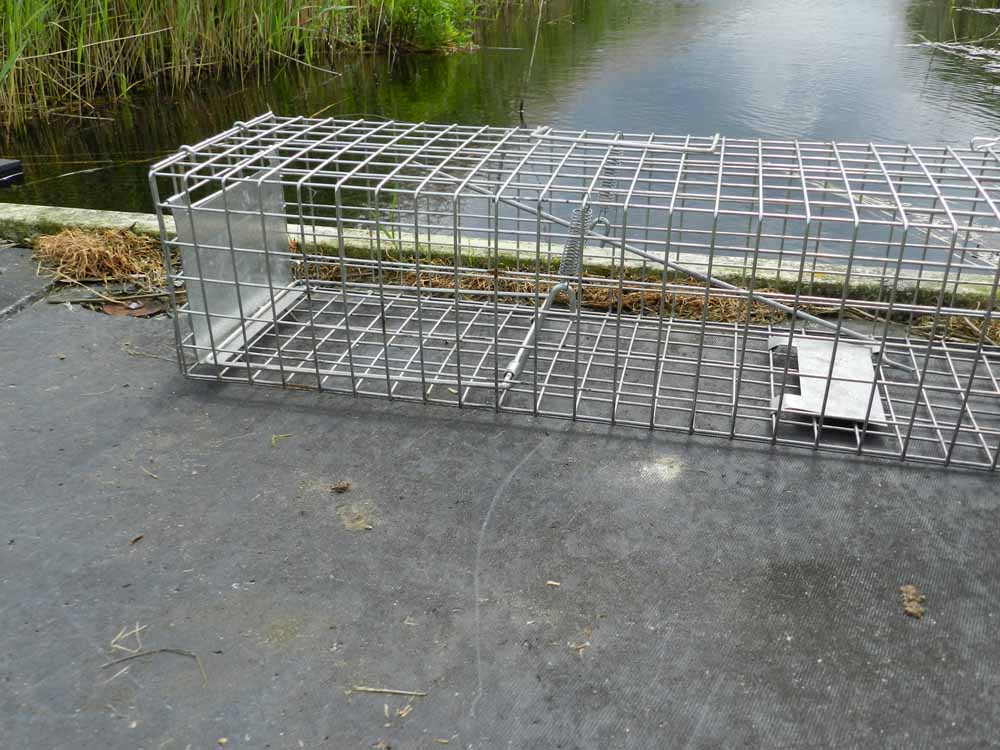 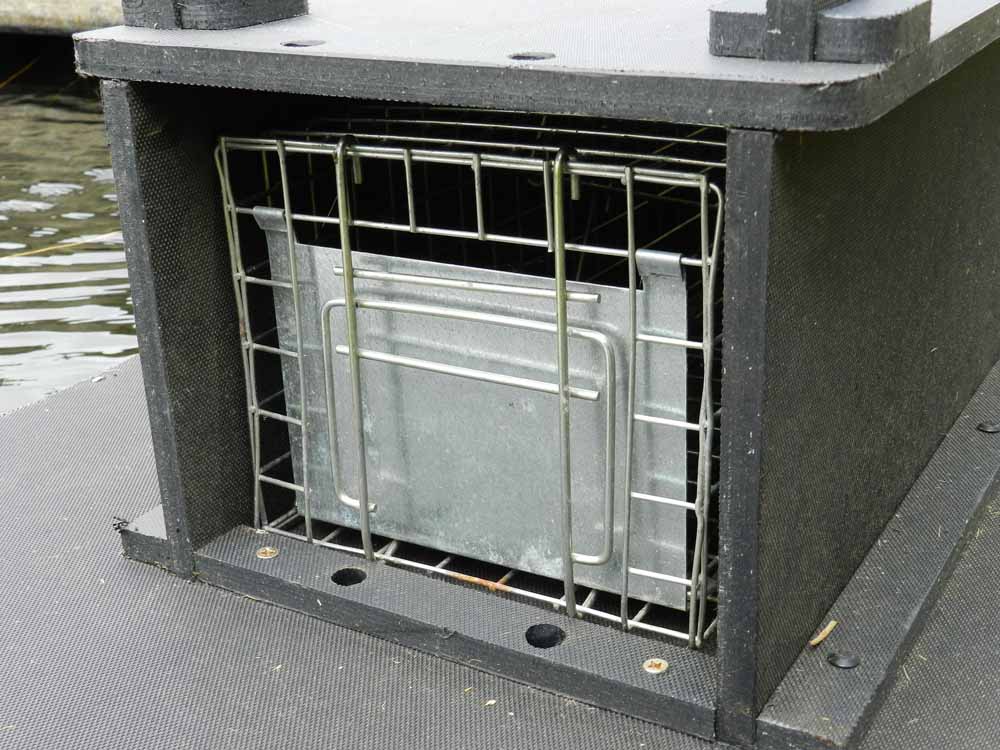 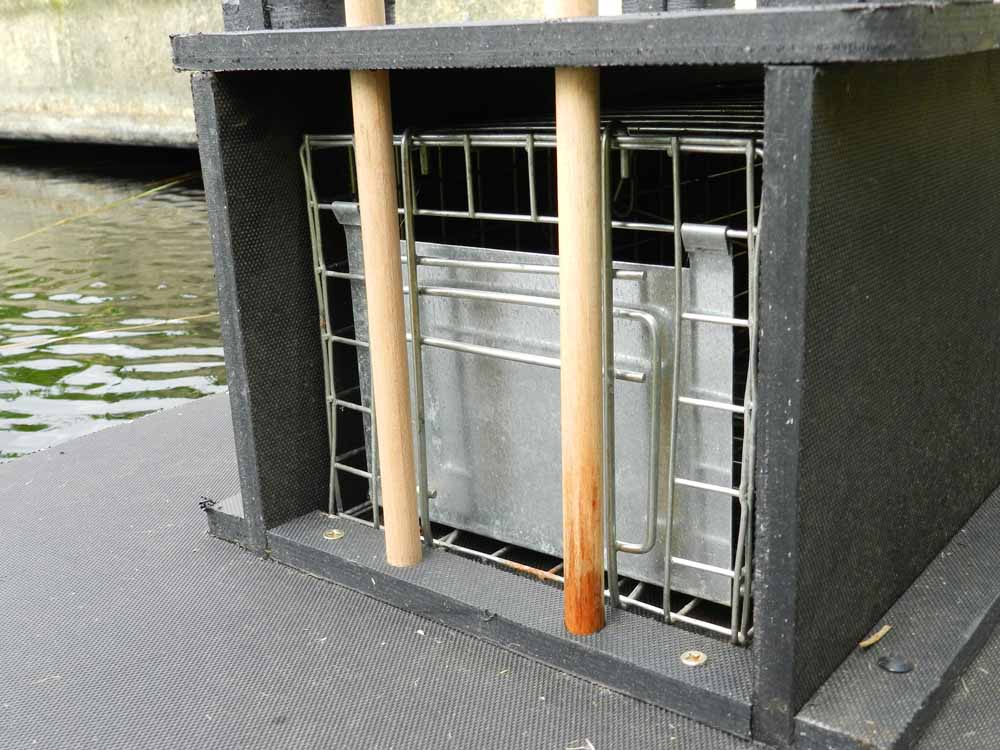 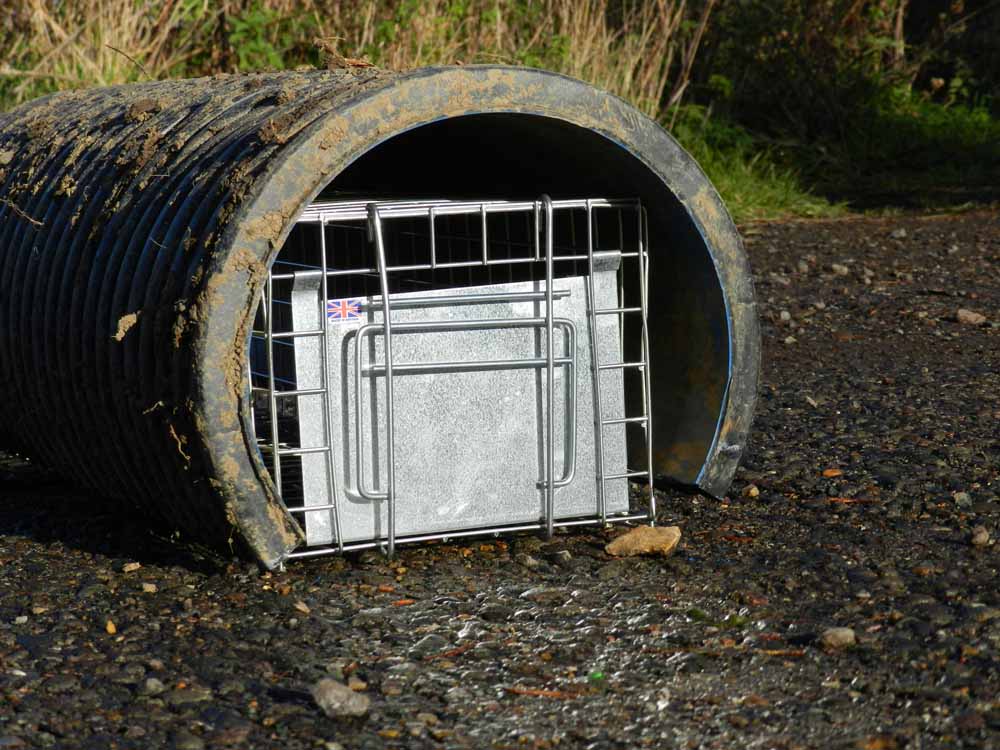 Trap in tunnel for bank trapping, similar effect can be achieved with other materials

Not everyone is willing or able to trap and dispatch mink, which is something we understand and if it is difficult we can usually arrange for someone to help. If you can trap/dispatch that is great, even better if you can help others dispatch mink when needed. Details of how to humanely dispatch mink are given in the Guidance Documents.